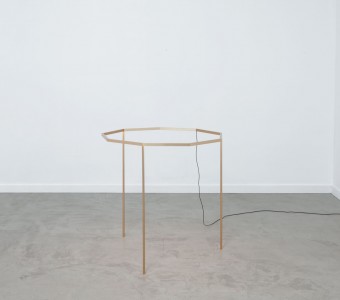 Small Museum for the American Metaphor is an exhibition which brings together European perspectives on the American West, and more specifically, the particularities embedded in the idealized fictions surrounding it. The visual argument here is that there is a certain architectonic “idea” that dwells on the celebration of Endlessness as mythicized in the American West. The metaphor is the base for an architecture that blurs the distinction between building and object, collapsing the different scales. It is an architecture that celebrates the fiction of the “wide open” and seeks to re-evaluate/reinterpret the world as a gigantic interior. In that context, a successful intervention is able to define hierarchies, carve out places, and make shared points of reference. The exhibition, much in the tradition of showcasing objects in a defined space, such as a cabinet, “collects”artworks, architectural models, drawings and other elements that consciously fade the distinction between object and representation. 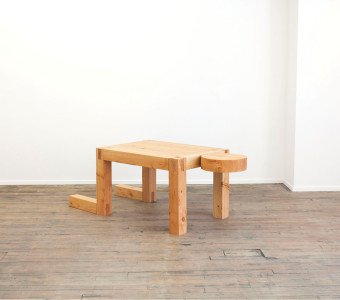 Recommended Shows: Beyond Chicago EXPO
by ROBIN DLUZEN on SEPTEMBER 17, 2014

Between 1919 and 1920, German architect Bruno Taut exchanged letters with fellow German expressionist architects about how to shape the architecture of the future. That correspondence is now the inspiration for “Future Tropes,” a show which has assigned six artists to create work that is both timeless and futuristic, resulting in some works that are typical, and some that are truly original. Tables, rugs, cabinets and group seating are all reexamined; many of the pieces, like Leon Ransmeier’s stainless steel, sculptural “gymnasium,” Action Object, or Jonathan Muecke’s multi-purpose, space-saving Blue Cabinet are minimal and sleek and in this way match our idea of a “futuristic” aesthetic might look like. Tanya Aguiñiga’s contributions stand out in their warmth and internalized approach; in Tierra, a series of tubes filled with soil from various locations of personal importance are woven loosely into a rug that is both elegant and luxurious in appearance, as well as modest and base in its materials. Inspired by Aguiñiga’s experiences with her infant child, Support is a soft, floor-bound dining room table made of movable denim building-blocks, filled with rice and beans. Changeable, practical (and somewhat edible), the piece is both universally functional and intensely personal.